Mick Wilson was born on 30th November 1962. His Mother agreed to the name Michael only on the condition that he was never to be called Mick (go figure!), which is something she has never done.

His love for music started when his parents bought him a guitar for Christmas in 1969 and, far from being the 5-minute wonder that was anticipated, it started a life-long passion for pop music that is just as strong today as it was then. In fact Mick still owns his first guitar, which can be seen at the back of the CD booklet on his new album, “So The Story Goes” 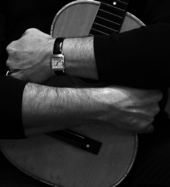 Turning to the Bass Guitar (yes, he still has that one too!) and teaming up with his elder brother Dave, they formed a band called Flame that played locally around their home town of Barking in Essex. This eventually led to a meeting with Alan Blakely from The Tremeloes, who was looking for a band to produce. Mick’s first taste of a real studio was at the age of 14 when he recorded the lead vocals to the band’s first single – a cover of Frankie Lyman’s “Teenager In Love”.

For the next few years, the band released more Blakely-produced material, appearing live and on TV shows both in the UK and Europe, culminating in a record deal with EMI (recording the single at the famous Abbey Road Studio 2) and supporting stable-mates, The Rubettes on a European stadium tour in the late 70’s.

Education called and Mick decided to concentrate on schoolwork until he was asked if he wanted to tour Germany playing bass. Leaving 3 A-Levels behind, he celebrated his 18th birthday in Berlin and realised that this is where his heart lay.

The 80’s saw Mick learning his craft and playing in various bands in and around London, but eventually put down the bass and started performing and recording just as a vocalist. Mick’s love of song-writing and producing led to him securing a publishing deal with Jobete Music (the publishing arm of Motown Records) in 1986. The following year on a writing trip to New York, he was approached to sign a deal with Virgin Music in Los Angeles.

Since then, Mick has performed and recorded with artists such as: Lionel Ritchie, Alice Cooper, Kylie Minogue, Alison Moyet, Chris Rea, Donny Osmond, Robin Gibb, Westlife, Cliff Richard, Cher, Lulu and the K.L.F. He is also a regular member of The SAS Band which play all over the world with guest artistes including: Brian May, Roger Taylor, Roger Daltrey, Paul Young, Kiki Dee and Tony Hadley.

He also is the lead vocalist for Three Friends, playing the music of Gentle Giant and featuring two members of the original line-up - Gary Green and Malcolm Mortimore.

Alongside live performances, Mick has had his own recording and production facility for over 20 years, which has been the base for a varied career as a producer and songwriter, as well as composing music for T.V. and live events for companies such as: Sky, BBC, ITV, Marks & Spencer, McDonalds, B.T., Levi’s, Toyota, Mercedes, Ford, Reebok and Mitsubishi.

Since joining Graham Gouldman for an acoustic set at the Green Room in London’s Café Royal over 10 years ago, Mick has become a regular in the latest incarnation of 10cc, taking on Lead Vocal duties and playing percussion, guitar and keyboards. Mick and Graham have also performed acoustic sets at numerous charity events including the Teenage Cancer Trust.

Mick continues to be a much in demand session vocalist in and around London, where he is based and most recently featured as one of the guest vocalists on a series of concerts across Spain with a 40 –piece symphony orchestra and rock band, playing the music of Queen.